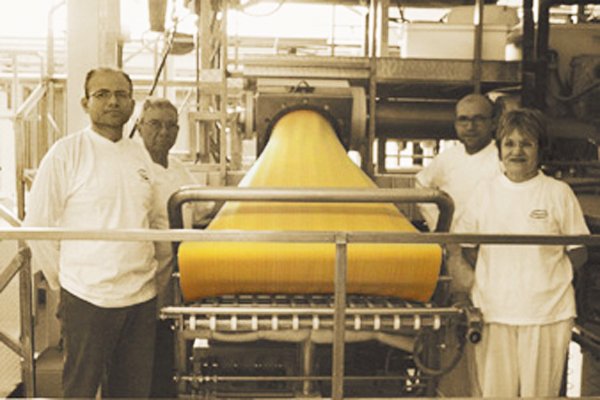 In Italy, in the early seventies, when the first Pastificio Columbro store opened, there was very little talk of organic food. The concept of healthy eating was almost exclusively associated with the culture of wholemeal flour or a macrobiotic diet. However, the following decade brought with it a desire for more detailed knowledgeof what we were buying in the food sector. One of the first pieces of European legislation regulating the denomination and marking of organically farmed foodstuffs only dates back to 1991.

Nicola Acrisio Columbro, in his commitment to “make products that are always good enough to be eaten by my children”, produced unlabelled organic pasta from the very beginning. In his workshop, the use of authentic, healthy raw materials was key and remains so today. He was well aware of the difference between pasta made with ingredients from “healthy natural” farming and pasta produced with chemically treated ingredients. He could see it from its appearance, smell it from its odour and taste it in its flavour, with no need for empirical data.

Since 1977, with the San.Ri brand, Pastificio Columbro has become one of Italy’s leading producers of officially recognised organic pasta. A true pioneer of organic produce.

Since 2000, with the introduction of the Columbro – Le specialità Italiane line, spelt, Senatore Cappelli, Khorasan and timilia flour the company produces more than 20 types of organically certified pasta.